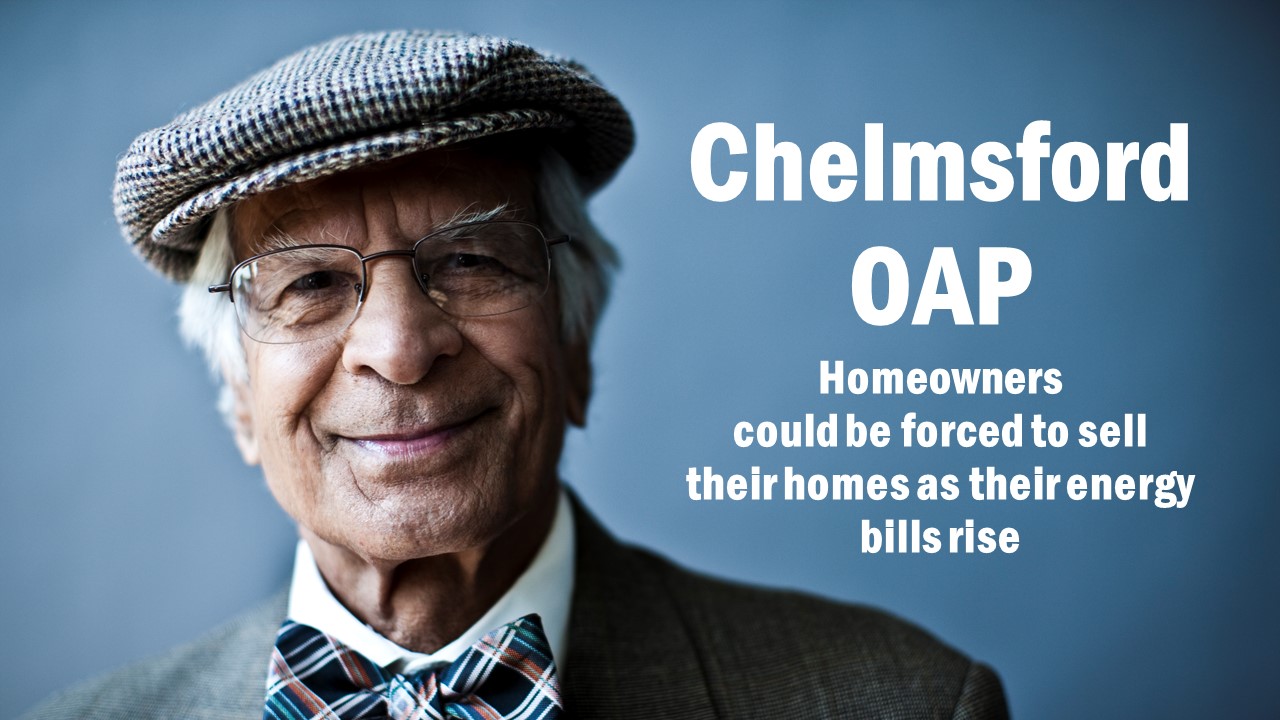 13,717 Chelmsford OAP Homeowners Could Be Forced To Sell Their Homes As Their Energy Bills Rise

The wholesale gas price has tripled in 2021. Even if you aren’t on gas at home, half the UK’s electricity comes from burning gas so, this affects everyone. Even though domestic bills have been protected from the majority of this with the Government’s price cap, energy bills will rise by at least 50% in April. This means the average energy bill will rise by £60 per month in the spring, thus producing a potential cost of living crisis.

Why have gas and electric bills increased so much?

The cost of gas (and indirectly electricity) rose during 2021 due to a number of reasons, and the troubles are worldwide rather than exclusively affecting the UK.

When will gas and electric prices rise?

The Government have an energy price which is the maximum amount your gas and electricity supplier can charge you. The energy price cap is set by Ofgem every six months, and the next review is this February. Any increases could only be introduced from the 1st of April 2022.

The existing energy price cap is £1,277 (for an average UK home), which was set in the summer of 2021 (and that was a 12% rise on the previous cap). Analysts believe without Government intervention, the February increase will be around 50% on that, meaning the cap will increase to just over £2,000 per annum.

That means there will be a lot of Chelmsford people that cannot afford the increase in energy prices.

Some have suggested the Government should remove VAT from gas and electricity bills for a year, yet that would only save them around £100 a year – but it’s still £100!

For those pensioners who reached state pension age after 2016, their state pension will rise in April by £5.55 per week or £288.60 a year. Considering their energy bills will rise by at least £720 a year, together with the underlying inflation for goods and services rising at 5.4% on top, this will mean many OAP homeowners will have to make a difficult choice.

However, as I have discussed several times in the Chelmsford Property Blog, many of those older Chelmsford homeowners are still in their original family homes even though their children have flown the nest.

They are living in large 3- and 4-bedroom homes with lots of rooms that require heating, even though they are not being used. To give you an idea of the difference of costs:

Therefore, I predict there will be an uplift in the number of mature homeowners in Chelmsford moving forward their downsizing plans throughout 2022/3 as they look to reduce their outgoings. The downsizing will also reduce other outgoings like their council tax and building insurance premiums.

Of course, many mature homeowners will make other choices. This could be a great time to look at other forms of heating like ground source heating and solar panels to reduce one’s dependence on energy from the National Grid.

You could ask a local Energy Assessor to perform an energy audit on your home by tasking them for an Energy Performance Certificate. If you need to know the name of a decent Chelmsford Energy Assessor, drop me a line or pick up the phone.

So, if downsizing is an option, what will that mean for you and the local Chelmsford property market?

A big issue will be finding a suitable home to move to. We very much have a chicken and egg scenario now as waiting for the right property to come on to the market, before you put your home on the market, will probably mean that your ideal property will sell even before the photographs have been taken of your home.

Yet, many Chelmsford homeowners are worried if they put their house on the market and it sells, they won’t be able to find another suitable home and thus be homeless? Classic chicken and egg – so what do you do first?

There is a third way of doing this … good old fashioned ‘chain building’. I have many mature Chelmsford homeowners that are contacting me to move home, yet don’t want to be made homeless. What we do is slowly build a group of people in a chain over many months. It requires a lot of patience to build a chain downwards and upwards around you.

There is no cost to this and no legal commitment to go through. It can take six, even twelve months to build a chain of people who are prepared to wait for the chain to form … yet by playing the long game, everyone gets their next ‘forever home’.

The long-term advantage to everyone else is that a new supply of larger homes will be put onto the market in Chelmsford. Yet, if you are going to rely on waiting for these properties to appear on Rightmove or Zoopla, you will be sorely disappointed.

According to national research from Denton House Research, 7 out of 8 people who viewed a house through an estate agent in 2021 were not on the mailing list of that agent before they viewed it. That means all these properties built on a chain builder (as above), will be sold and won’t appear on Rightmove or Zoopla, meaning you will miss out.

You have to get yourself on the mailing list of our estate agency (and other agents if they do this chain building) so you don’t miss out on your next forever home in Chelmsford.