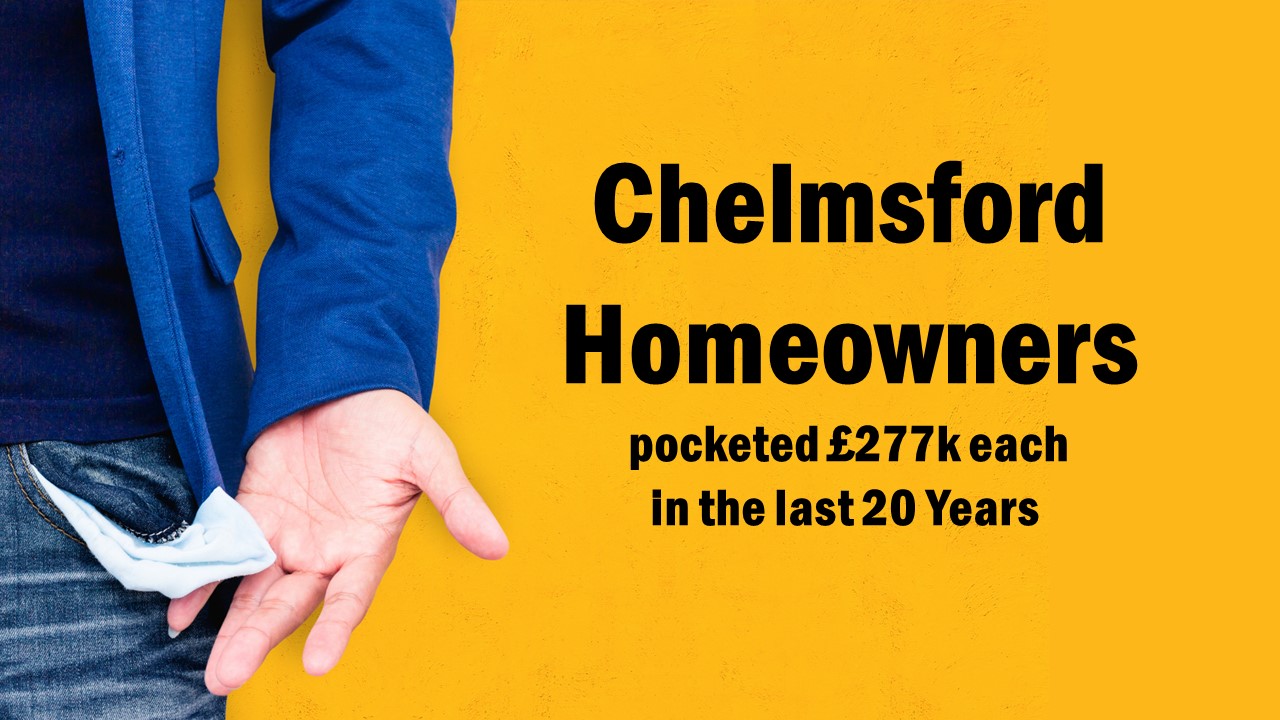 Chelmsford Homeowners Pocketed £277k Each in the Last 20 Years

Looking back at the people that bought in those first few years of the new Millennium, few of those buying or selling property in 2001 could have forecast the massive financial impact that their decision then would have on the rest of their lives.

Now of course these are average prices and don’t take inflation into consideration.

Yet even when adjusted for inflation, Chelmsford house prices have still risen by 123.8% in the last 20 years.

Characteristically, the longer a homeowner has owned their Chelmsford property, the larger the gain when they sell. Yet most of these profits are never seen by Chelmsford homeowners. It has never been money in the bank unless you sell up and downsize or move somewhere cheaper. Instead, these gains are re-invested back into the housing market when they buy their next home.

So, whether the gains are banked or tied up in their bricks and mortar, it looks like all the Chelmsford homeowners are in the driving seat.

What about all the Chelmsford first-time buyers, priced out of the market and unable to get on to the property ladder?

Are the young of Chelmsford losing out again?

Reading the newspapers you would think so, yet nothing could be further from the truth. In fact…

That isn’t a typo!

Of course, for most young Chelmsford potential first-time buyers, the other largest barrier to home ownership is the matter of raising an adequate deposit.

Rising rents (and future energy prices) won’t help and will in fact make this problem worse, giving ambitious Chelmsford first-time buyers not much left at the end of the month to save a deposit for their first home.

With soaring Chelmsford house prices, this means the amount Chelmsford renters need to save for their deposit is growing year on year.

For these annoyed renters, there is the unpleasant irony that if they could only get on the Chelmsford housing ladder, they would find themselves better off. They would spend a lower proportion of their monthly take home pay on keeping a roof over their heads.

Some people in the press have suggested the older generation, with all the equity tied up in their homes over the last 20 years, should release some of the money and give it to their children or grandchildren to help them on the ladder maybe?

Reports in the press have also described many homeowners in their 60’s (and older) changing their plans to move home. Many were planning to downsize to release the tied-up equity in their home. That equity would either be used to invest in the bank to produce an income for them and/or to help their children (sometimes even grandchildren) on to the property ladder.

Yet with the interest paid by banks and building societies on any lump sum being very low, to many mature homeowners it hardly seems worthwhile making the move to downsize. This means many younger would-be first-time buyers are missing out on help from the Bank of Mum and Dad (or the Bank of Grandad and Grandma) with their deposit.

However, the problems caused by low interest rates could also be their saviour.

Many older homeowners have turned to Equity Release, thus allowing them to get hold of a share of the equity amassed in their property, in exchange for a tax-free lump sum of cash.

Cash that could be used to help with deposits for their children/grandchildren?

The mature homeowner then stays in their larger family home and helps their family buy a property.

Whilst I am not a mortgage adviser (and you must take proper advice from a qualified mortgage broker), equity release mortgages don’t have end dates and the interest payments are rolled up (until you pass away). This means that there aren’t any monthly payments.

The interest rate you pay is normally fixed for the mortgage and because interest rates are so low, that means the debt shouldn’t balloon up. And should you decide to sell in a few years’ time, you just pay back the capital, redemption fee and the small amount of interest accrued.

Now of course, that does mean there will be less for your offspring to inherit when you pass away.

Equity release mortgages though have had some bad press recently. In the past they were unregulated and pricey. Yet today, there is more protection for borrowers.

One answer to the growing interest debt is to pay part or all of the monthly mortgage interest charged, yet you must have the income for that.

You also need to take advice on how the equity release will affect your liability for nursing home fees and inheritance tax. Also, if only one person in your home is the owner of the property, if that homeowner dies, the partner who is not on the mortgage (because only owners can go on a mortgage) won’t have any rights to stay in the family home.

Finally, if you are planning to move, don’t just compare the interest rate, but the redemption charge for early repayment – some of them can be very high.

My advice – take professional advice and speak to your family and involve them. Yes, we have all built up some amazing equity in our Chelmsford homes, and yes, there is potential to help the younger generations with that wealth. Just go in with eyes open and know all the facts, all the pros and all the cons – then decide what is best for you with all that information to hand.

What are your thoughts, as a mature Chelmsford homeowner or a first-time buyer, on this? It would be good to hear from you.