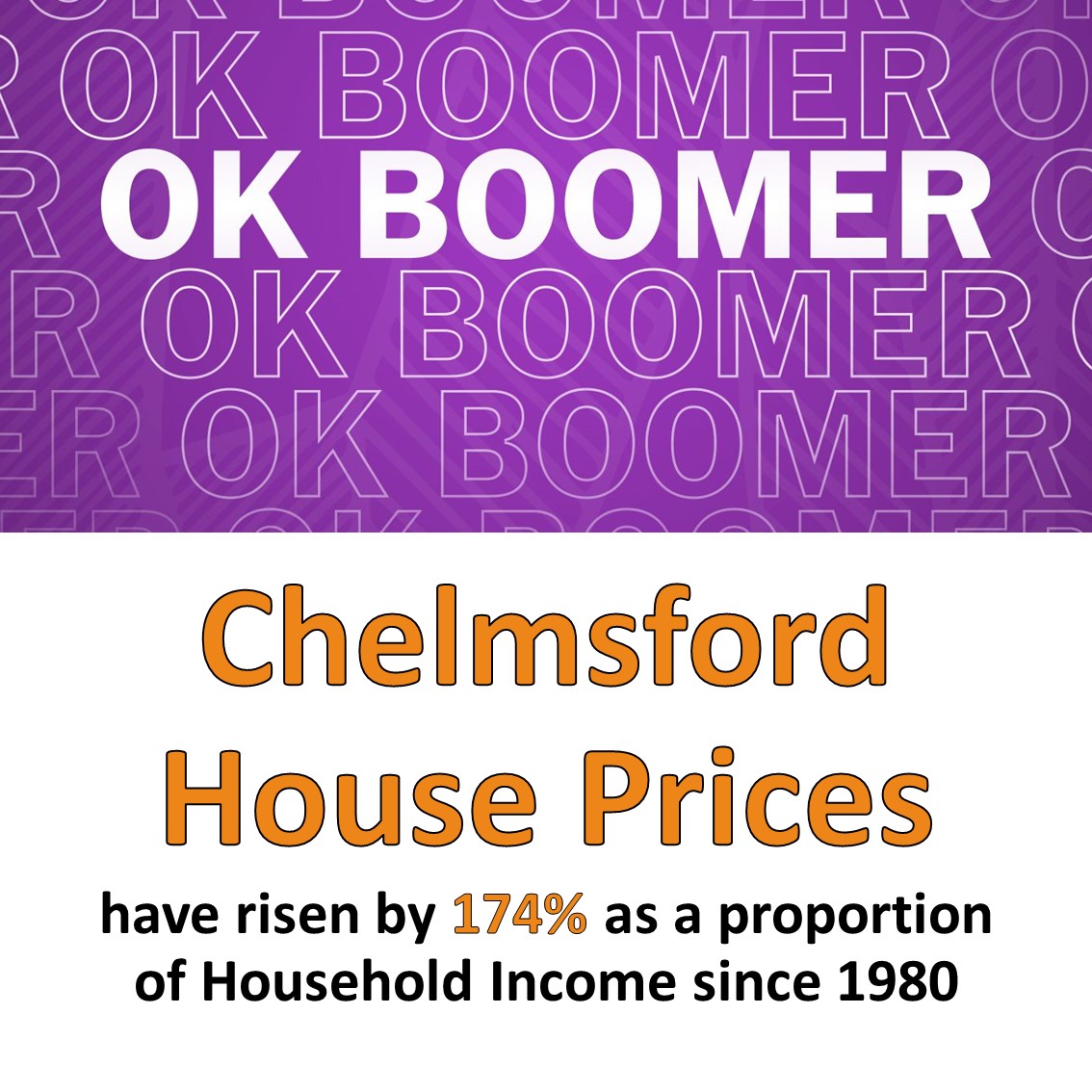 Have the Baby Boomers (people between the ages of 55yo to 75yo) messed things up for the Millennials in terms of getting on the Chelmsford property ladder? They bought their own council houses in the 80’s and 90’s, meaning there are no affordable homes for today’s youngsters, thus driving up the demand for rental homes and the price of homes (making them unaffordable). So, I decided to look at the figures, which do not make for good reading.

… it’s no wonder then that Millennials are pointing the finger at Baby Boomers!

And the problems don’t just stop there. Not only do the newspapers state there is a housing crisis of affordability, but also a crisis of the availability of homes for people to live in. The political parties using housing as a ‘vote getter’ mentioned stats such as in 1981 there were 5.1 million council houses and today that stands at 1.6 million. This is important because, as a substantial number of people will never be able to afford to buy, social housing plays a significant role in homing them.

It all looks rather damning and the phrase ‘OK Boomer’ looks quite apt.

(The phrase ‘OK Boomer’ become fashionable as it started as a way of showing Baby Boomers that things were “easier in the past”, yet now it has become just a way for younger people to discredit the views of older people).

Well, checking the stats, the political parties seemed to forget the number of housing associations homes (which are also social housing) has risen from 0.4m to 2.6m homes in that time, therefore, whilst there is a drop in social housing, it’s a net figure of 2.3m fewer social-rented houses, instead of the 3.5m in the paragraph above.

Baby Boomers simply did the best they could with the circumstances given – it’s not like that these older generations have been conspiring in the food aisles of Waitrose or M&S on how to mess things up for the next generation. There are fundamental underlying problems in British society that means things are difficult for our younger people – it’s everyone’s responsibility to solve those underlying problems – we can’t just blame the Baby Boomers. Millennials aren’t morally superior to Baby Boomers just because they didn’t grow up in the same era of economic growth and house price inflation.

What some people seem to forget is whilst Chelmsford property values were lower, so were salaries. The true cost of affordability is the mortgage payments. Assuming someone bought an average property in 1980 and again in 2019, using a 95% mortgage at the prevailing mortgage rate of 17.8% in 1980 and the current 1.65%, today in Chelmsford the mortgage accounts for 58% of the household income (assuming a single income) compared to 79% in 1980. This has to be one of the main reasons why many families became two wage households in the late 70’s/early 80’s as housing affordability was diminished with these eye watering high interest rates.

Things were much tougher for homeowners in 1980….

The issue here is something much deeper. Baby Boomers say it is the Millennials’ own fault they can’t afford to buy their own home because they spend all their money on three holidays, avocado on toast, going out down the pub 3 times a week and buying the latest iPhone or suchlike whilst Millennials accuse the Baby Boomer generation for ruining the housing market ‘per se’ by being selfish. Both are right and both are wrong.

In my own involvement with friends and family, many Chelmsford Baby Boomers are trying their best to help out their now grown up children with a deposit. They are fully aware of current Chelmsford house prices compared to when they bought their own homes.

I am not a fan of attaching labels, be it Millennials, Baby Boomer or Gen-X. It’s really a point of attitude and behaviour and circumstance rather than the date of your birth. Every generation has had its fair share of feast and famine and whilst I appreciate the irony of the title of this article, let’s stop labelling people and making assumptions, everyone needs to understand each generation’s issues and be more ungrudging to each other.