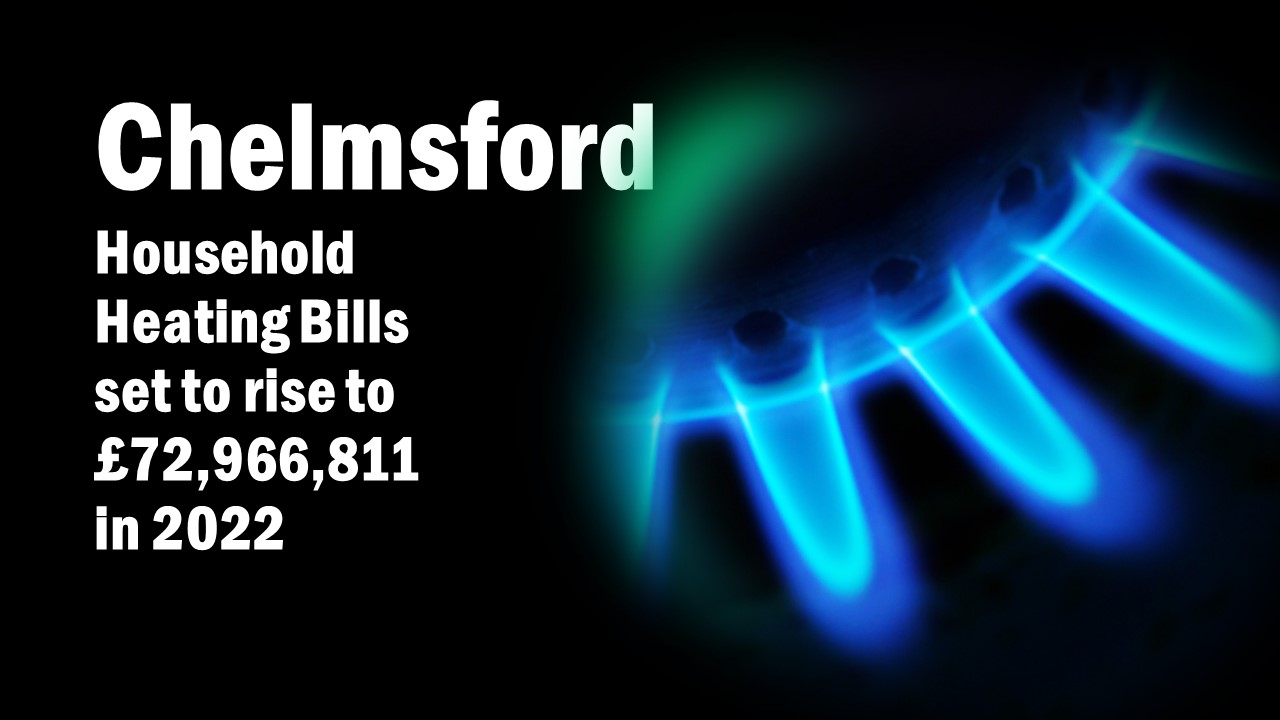 The energy bills of every Chelmsford resident will rise in April as the price cap increases to account for the global increase in the cost of gas. Those not on the gas mains will still be hit as the UK uses gas to make 45% of its electricity.

So, what can Chelmsford residents do to reduce their energy consumption and ultimately save money?

First, let’s look at the scale of the costs.

Considering the increase in energy prices from April, the combined energy bills for the whole of Chelmsford come to…

There are extra energy costs for washing, fridges, etc., yet I wanted to focus just on the home as this is a property blog.

Everyone’s bills will be around 50% more expensive in 2022 than in 2021, but it’s not too late for Chelmsford people to take some quick steps to cut their energy bills and, at the same time, cut our carbon footprint.

Just over a quarter of the UK’s carbon comes from heating and lighting our 27.6 million homes, and each UK home produces 4.39 tonnes of carbon dioxide a year.

Upgrading the energy efficiency of UK homes is seen as a vital step to attempting to mitigate the issues of climate change, fuel poverty and our nation’s energy security.

So, what are some quick wins for Chelmsford residents to reduce the energy bills on their homes, and how will energy efficiency play a more significant part in the value of Chelmsford homes in the future?

These are just a handful of ideas. Check out the internet for others as it’s fascinating how much energy we use for overfull kettles, chargers left on and tech on standby etc.

Yet, these things will only scratch the surface… many of us will need to go further, especially Chelmsford landlords, to retrofit our properties to make them more energy-efficient.

This is particularly important as in June the Government announced they would make the country carbon neutral by 2050, meaning Britain’s homes need some enormous retro-fitting to meet these ambitious climate targets.

In 2018, the Government required private landlords to improve the energy rating of their rental properties by prohibiting the rental of any property with an Energy Performance Certificate (EPC) rating of F and G (the lowest ratings). Yet from 2025, it is proposed that will be increased to C for all new tenancies and 2028 for all existing tenancies (more on these EPCs below).

I don’t believe there is an appetite to mandate private homeowners to do this work, though you never know in the future.

So, how do you find out about your Chelmsford home’s eco-credentials?

Since 2007, every new home that has been built, rented out or put on to the market in Chelmsford has had to have an EPC, giving it a rating between A and G (rather like those stickers you see on fridges and washing machines).

A is the highest rating (i.e., best energy efficient and greener), and G is the worst efficiency rating.

43.5% of Chelmsford homes are in that eco-friendly A to C energy performance band rating, compared to the national average of 40.1% So, what next? Well, the Government will attempt to make the green revolution as painless as possible with technology.

In the future, we might have hydrogen central heating instead of mains gas; or have solar panels for electricity, all triple glazed windows and even ground source heating – sounds fanciful? Well, who would have thought some of the most wanted cars would be electric 20 years ago?

There is no doubt that the energy efficiency of our homes will rise in the coming years as the cost of fuel increases and people’s opinion on going green changes.

You don’t need to spend thousands of pounds to find out what you can do to make your property greener and cost less. Look at your EPC and it will tell you what small changes you can make to improve your Chelmsford home’s energy efficiency rating and ultimately save yourself money. If you want to find the EPC rating of your Chelmsford home, go to epcregister.com.

If you need an EPC, drop me a line as I know some great local energy assessors that can easily do an EPC on your property at a price that won’t cost the earth!