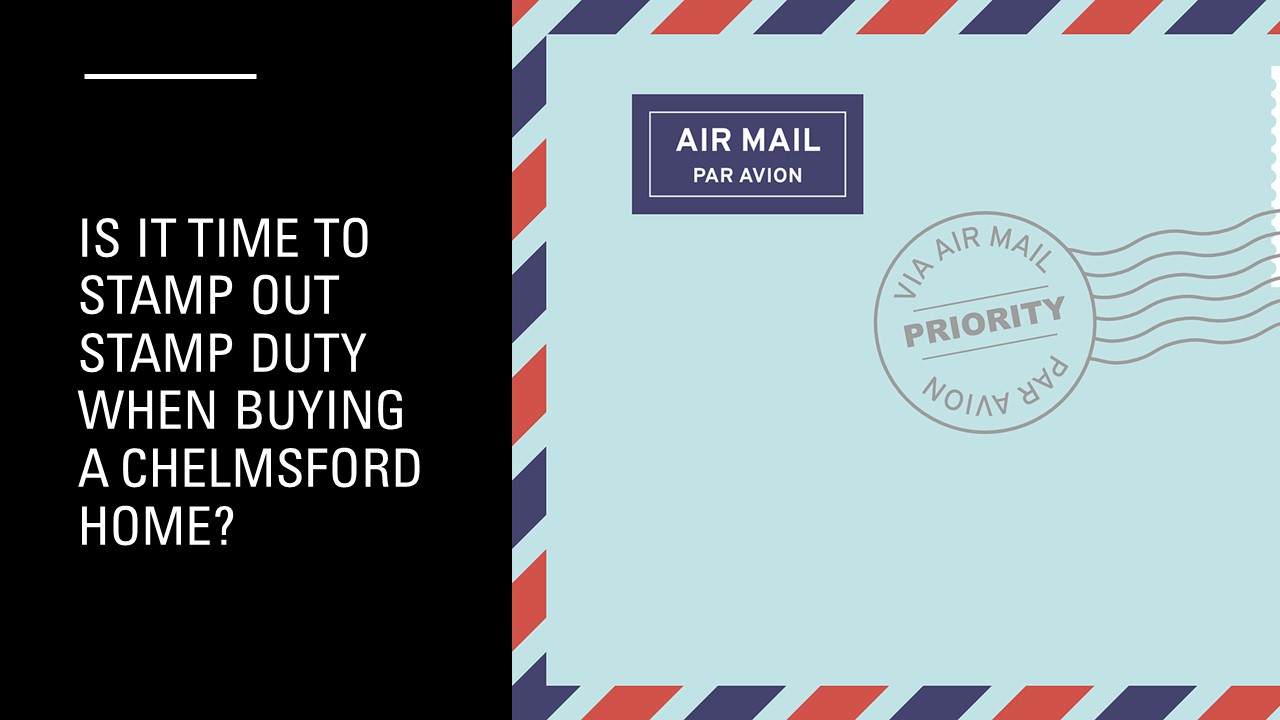 Chelmsford Property Market: Is it Time to Stamp Out Stamp Duty?

Most people pay Stamp Duty Tax when they buy a property, house, apartment or other land and buildings over a particular price in the UK. The Chancellor, Rishi Sunak (quickly followed suit by the Welsh and Scottish Governments), announced last July that Stamp Duty was partially being suspended on all English property transactions up to £500,000 (£250,000 in Wales and Scotland) – a Stamp Duty Holiday.

That meant only 1 in 8 English buyers would pay any Stamp Duty Tax on their home purchase (if it was over £500,000), saving any buyer up to £15,000 in tax on the purchase. The problem is the property needs to have been purchased and bought by the 31st March 2021. Complete the transaction a day later, and those buyers will have to pay Stamp Duty.

The issue is local authorities are snowed under with local search requests, mortgage companies and conveyancing staff are working from home, so property transactions are taking much, much longer. This means many Chelmsford (and UK) buyers who have currently sold (subject to contract) will miss out on the stamp duty saving.

Most (not all) estate agents have been warning the buyers and sellers in their property chains that some deals might not make the 31st March 2021 deadline and pleasingly, most people aren’t moving because of the Stamp Duty Holiday (they are moving because they need extra space because of the pandemic). However, it only takes one person in the chain not to be ‘singing off the same hymn sheet’ for the whole chain to collapse … so keep in touch with your estate agent.

A campaign by one of the national newspapers and an online petition to extend the stamp duty holiday has meant the topic could be debated in Parliament in the next few weeks, after 100,000 home buyers and sellers signed that petition, asking for an additional six-month Stamp Duty Holiday. The home buyers and sellers are worried the property market will collapse after March 31st when the Stamp Duty Holiday is removed.

The last time British home buyers were conscious of upcoming Stamp Duty changes, it distorted the number of properties sold. The bigger question though is, did it change the overall number of people moving home?

In November 2015, the then Chancellor, George Osborne, announced in his Autumn Statement that buy to let landlords would have to pay an additional 3% in Stamp Duty (over and above owner occupiers) for all property bought after the 1st April 2016. As shown in the graph below, this caused a surge in property buying (which we have seen since this summer with the Stamp Duty Holiday), with many Chelmsford buy to let landlords completing their property purchase in March 2016, as they dashed to complete their property purchase before the tax increase.

In the 3 years of 2015/6/7, the average number of Chelmsford properties sold (transactions) per month was 264 per month, yet in the month before stamp duty was changed in March 2016, transactions rose to 369, an uplift of 39.5% from the average or an extra 105 transactions in that month alone. Yet, look at the months of April and May, the property transaction numbers slumped, meaning in those two months combined, there were 93 less transactions.  A negligible different don’t you think? So, if the Stamp Duty Holiday isn’t extended, what will that mean for the UK and Chelmsford property market?

London and the South East seem to be particularly exposed to the removal of the Stamp Duty Tax break because it has such a high proportion of property priced between £300,000 and £500,000. These areas benefit from the highest tax savings relative to house price.

So, if the Stamp Duty Holiday isn’t extended – it might not be such the nightmare scenario as some people believe.

My advice to all buyers and sellers is to be constantly talking to your estate agent, your solicitor and your mortgage broker. With your estate agent to ascertain if they have asked every person (or asked the other agents in the chain to ask the question), “What if we don’t meet the stamp duty deadline?” With your mortgage broker and solicitor to give them all the information they need to ensure there are no delays with any information they request from you.

One final thought, some mortgage providers allow insurance policies to be purchased by your solicitor in case your searches (from the local authority aren’t back in time) … the cost of those will be much lower than the cost of the stamp duty … again, speak with your solicitor.  Irrespective of whether you are a client of mine or not, if you would like a chat about anything mentioned in this article, don’t hesitate to contact me.