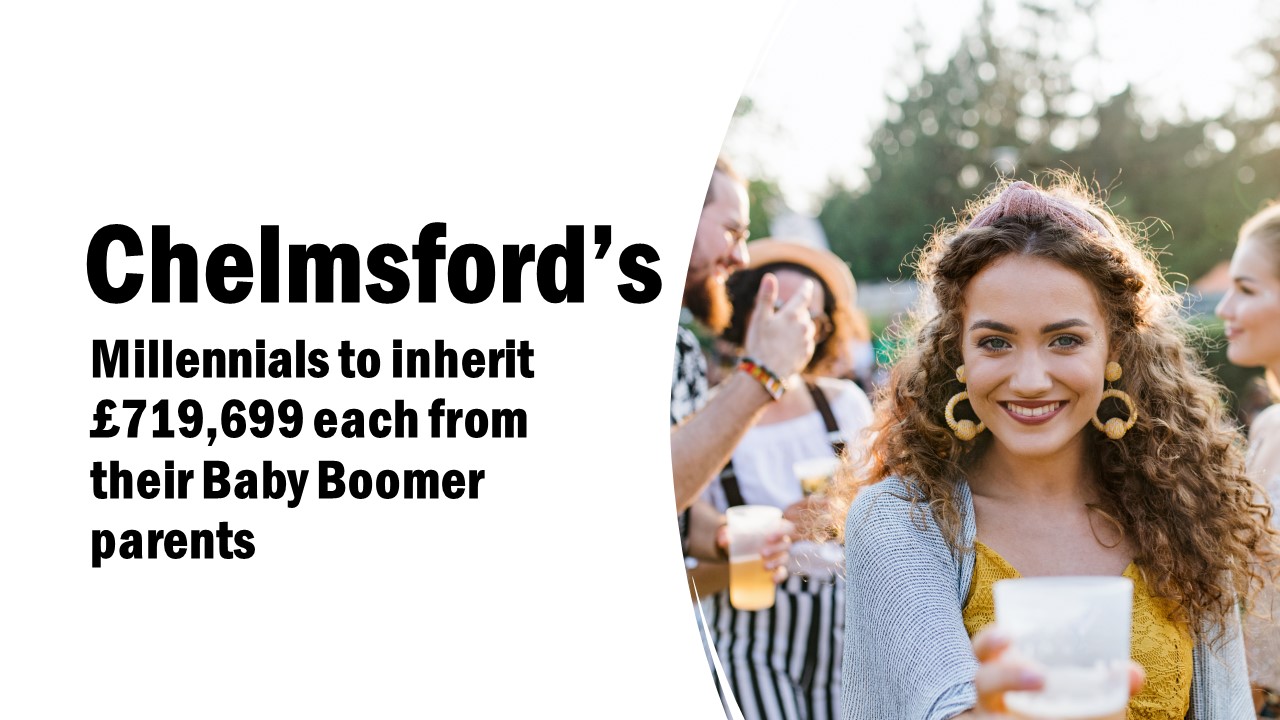 Chelmsford’s Millennials to Inherit £719,699 Each From Their Baby Boomer Parents

The total value of homes owned by Baby Boomers in Chelmsford alone is £7,090,183,935 – and two-thirds of the Chelmsford Millennials are set to inherit all that in the next few decades!

Could this be the answer to the housing crisis?

Could Chelmsford Millennials live it up for the next few decades, safe in the knowledge they will get a huge lump sum to pay off their debts and buy a house with what is left?

Before I look at that, which set of people in Chelmsford exactly are the Chelmsford Millennials or Chelmsford Baby Boomers?

All these are phrases used for the different groups of people in their various life stages of our society.

So, splitting the groups down:

Silent Generation: Born 1945 and before (77 years old and above)

Using data from the Census, my research shows there are …

The generation that will inherit those Chelmsford properties will be the millennials.

There are 14,770 millennials in Chelmsford.

After looking at the local demographics, homeownership statistics and current life expectancy, around two-thirds of those Chelmsford Millennials have parents who own those 16,119 Chelmsford properties, meaning each is in line for an inheritance of £719,699.45.

Yet what about Chelmsford’s Silent Generation?

The issue for those who will inherit their parents’ homes is that there are far more Generation X people in Chelmsford than millennials.

So, whilst the Chelmsford Millennials are less likely to own their own home compared to Generation X and so have done not as well in amassing their assets and savings, they are more likely to benefit from an inheritance boom in the years to come.

This is likely to be very comforting information for those Chelmsford Millennials, including some from humbler upbringings who historically would have been unlikely to receive an inheritance.

Nevertheless, inheritance is not the silver bullet that will get the millennials onto the Chelmsford housing ladder.

Nor will it deal with the increasing wealth inequalities in British society, as the inheritance they are likely to receive won’t be accessible when they are trying to buy their first Chelmsford home.

So before all you Chelmsford Millennials start running up your credit card bills, safe in the knowledge they will be paid for when your parents pass away in 20/30 years, over half of the females and around a third of men are going to have to pay for their nursing home fees.

Remarkably, I recently read 25% of people who must pay for their nursing home fees run out of money, and therefore have to rely on funding from the local authority

Therefore, if you are a Chelmsford Millennial, no inheritance will be left for you. It goes without saying, most Chelmsford parents want to give some inheritance to their children.

Yet if waiting until you pass away to help your children or even grandchildren with your legacy could be seen as too late, so what are the options?

One solution to help and fix the housing crisis in Chelmsford (and the UK as a whole) is if parents and grandparents, where they can, help financially with the deposit for a house whilst their children/grandchildren are in, say, their 20’s and early 30’s.

Buying a Chelmsford property is much cheaper than renting – I have shown it many times in these articles.

It’s not a case of not being able to afford the mortgage; the problem is raising the mortgage deposit (of 5% to 10%) for these Chelmsford Millennials.

Maybe families should be discussing the distribution of family wealth whilst everyone is alive (in the form of helping the family with house deposits) as opposed to waiting until the end, as it will make a massive difference to everyone in the short and long run.

And a final thought, your legacy will have a more significant impact, and you will be here to see it with your own eyes.

A win-win for everyone.